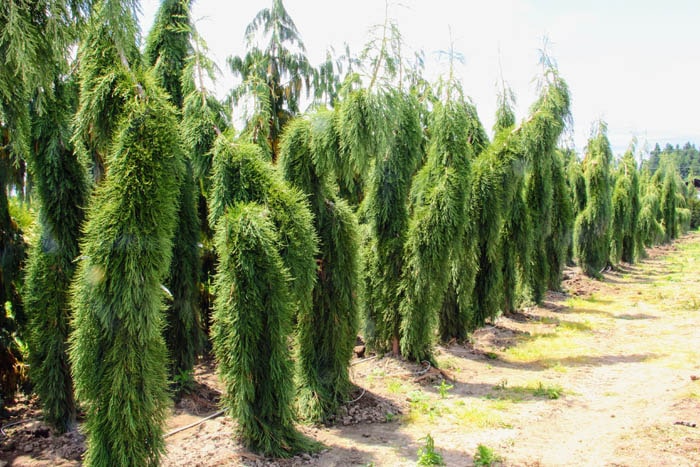 Giant Redwoods are the most massive trees on earth, and also among the oldest. Fortunately, there are dwarf and colorful cultivars of these magnificent trees that make stunning additions to the landscape.

Giant sequoias (Seqoiadendron giganteum) are among the most famous trees in the world. They are native to the western side of the Sierra Nevada mountain range in California in stands called groves, many of which are protected in national parks. They average 200’ to 275’ in height with a single trunk diameter of 15’ to 20’, and they can live for 2,000 to 3,000 years. The General Sherman tree in the Sequoia National Park Is considered to be the largest living tree on the planet by volume. It is 275’ tall with a 25’ diameter trunk, and an estimated mass of 2,100 tons. The first branches start 130’ above the ground. Giant sequoias were logged for their timber from the 1880s through the 1920s, but most are protected now, and are grown horticulturally in parts of Europe, the United Kingdom, Australia, New Zealand, Chile, and the western and southern United States and western Canada. Giant sequoias grow best in full sun to light shade in deep, consistently moist, loamy soil. They don’t do well in extreme temperatures and prefer a moist climate with dry summers. Giant sequoias are members of the Cypress family.

SEQUOIADENDRON ATTRIBUTES
When they’re young, giant sequoias have a pyramidal shape with their branches drooping to the ground. As they mature, typically after 100 years, they lose their lower branches and develop a broad, high crown. Their leaves are small, blue-green, awl-shaped needles that hug the branches, and their 2.5” cones take approximately two years to mature. Even though the trees grow so large in their native habitat, smaller green, blue-green, blue, and golden cultivars have been developed that will be a good fit for any sized property.

SELECTING THE RIGHT SEQUOIADENDRON
Giant sequoias grow best in USDA hardiness zones 6 to 8 in moist regions with dry summers. Depending on the size and color of the variety, site your tree where it will get full sun, moist soil conditions, and plenty of space to grow and be appreciated. Dwarf trees will do well in borders and small gardens, while taller and weeping varieties are perfect as accent or specimen trees. If you need help deciding which tree is right for your property, let us know and we’ll be glad to help!