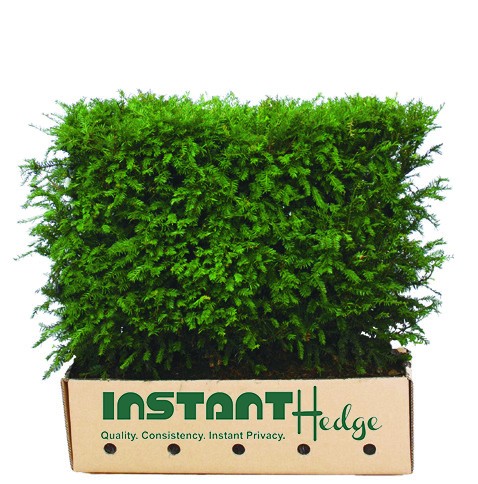 The evergreen yews (Buxus) have been trees of mythology, history, and horticulture for more than two millennia. In the past, the wood had been used for constructing boxes, furniture, and long bows, and they were commonly grown in gardens as trees or hedges. Now they are used primarily for horticultural purposes. There are a number of yew varieties that are popular for use as accents, privacy screens, hedges, topiary, and bonsai.

Hicks yew (Taxus × media ‘Hicksii’) is a hybrid between the English yew (Taxus baccata) and the Japanese yew (Taxus cuspidate). It is an excellent small tree for a hedge due to its dense growth, and upright, fastigiate form. Its dark green, two-ranked needles give the plant a soft effect, and the red, berry-like fruits called arils, are ornamental against the green needles. All parts of the yew are poisonous except the fleshy arils, but the seeds inside it are highly toxic. Hicks yew will grow in full sun to partial shade, and is considered an excellent choice for shady areas. It takes very well to pruning and is a superb tree for foundation plantings, topiary, and low hedges or higher privacy screens up to 20’.