Weeping Japanese maples have long been used in landscapes and famous gardens for their sculp-tural branching, delicate, ornamental leaves, and their slow rate of growth. Young plants form a low, mounding habit and older specimens develop an architectural masterpiece of branching!

There are a handful of older cultivars which are the stand-by green laceleaf maples for landscaping. Two that come to mind are 'Viridis' and 'Waterfall', both of which have vibrant green color throughout the growing season and yellow-orange fall color. Several new and improved selections have become available in recent years, and they are worthy of consideration for gardens and landscapes. 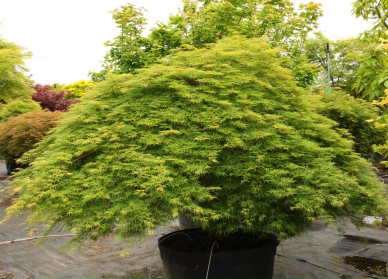 Emerald Lace has leaves much smaller than other green laceleafs such as 'Waterfall' or 'Viridis'. The leaves are finely dissected, resembling the leaves of the "filigree" maples. Fall color comes early in the season, starting in late August and going through October, gradually changing from a rusty-orange to a deep crimson red. When trained upright, this variety forms a graceful fountain-like tree. If unstaked, it forms a low rounded canopy scarcely 2 or 3 feet in height. 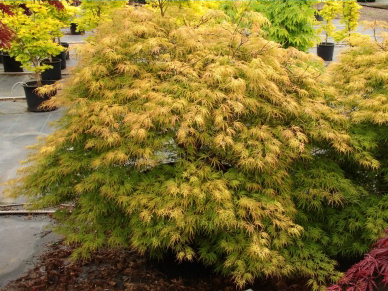 Lemon Lime Lace is such a fitting name for this compact Japanese maple. Leaves emerge a very light lemon yellow. When grown in the sun, the leaves keep a yellow-green appearance, or in the shade they become more lime green in summer. In fall, the deeply dissected foliage changes to orange and yellow. 'Lemon Lime Lace' forms an irregular mound with semi- pendulous branches. The delicate leaves are similar in texture but larger than those of 'Emerald Lace'. 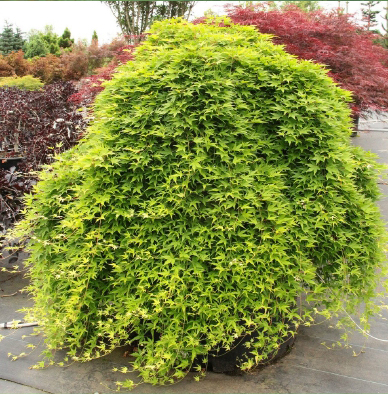 This unusual green Japanese maple has an incredibly pendulous habit, with slender, weeping shoots growing as much as six feet a year! Trained to a desired height, the selection cascades much more intensely than 'Jiro shidare,' which used to be considered the most remarkable weeping broadleaf. Palm-shaped spring leaves emerge yellow-green, change to dark green during summer, and end with orange to red in fall. Ryu sei is unique from other green weeping Japanese maples since the leaves are not dissected. 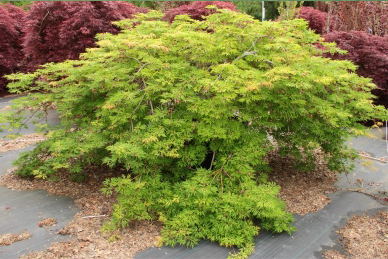 A popular, sturdy Full Moon maple, this selection has a refined, horizontal to weeping habit so it cascades down a bank or spreads gracefully. In addition to its beautifully sprawling habit, the leaves are highlighted by prolific red-purple flowers in spring. The highly dissected leaves change to brilliant yellow, orange and crimson in fall.

Japanese maple with a weeping habit and red color are among the most popular. Varieties like Tamukeyama, Crimson Queen, and Inaba shidare have been the stand-by choices for landscapes. While these varieties remain favorites of landscapers, some superior varieties have become available on a smaller scale that are worthy of consideration! 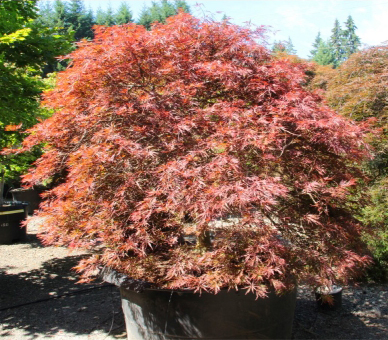 Red Dragon is reputed to keep its deep purple-red color better than any other laceleaf, and we have certainly seen this to be the case! This weeping Japanese maple starts the season with bright burgundy new foliage. Leaf color softens to purple-red, which holds throughout the season, even in shade. Compact and well-branched, the cascading mounded bushy maple works well in a small garden or container. This is a favorite for warm climates because its red color persists much better than other varieties which fade by mid-summer. Fall color is also bright red. 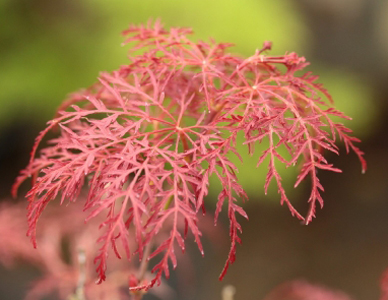 Red Feathers has color similar to Red Dragon but with a much more finely dissected leaf. Because of its delicate texture, this variety apperciates a bit of afternoon shade in the summer. It grows more slowly than 'Red Dragon', causing this variety to form a rather dense mounding habit. For a similar texture but an even slower rate of growth, 'Red Filigree Lace' is an excellent choice for small spaces! 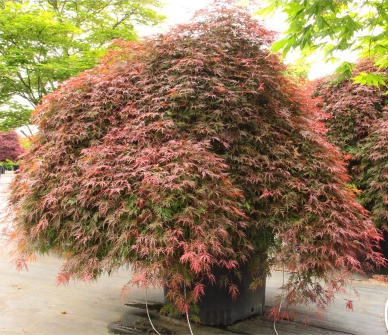 Orangeola is not quite as red as many other laceleaf weeping Japanese maples, but the foliage is an orange-red when it first emerges in spring. By mid-summer the color is a mix of burgundy and muted green. Orangeola's dramatically cascading habit and long-term seasonal interest make it one of our favorites. A second flush of summer growth repeats the bright spring show and produces a beautiful contrast against the older foliage. Dark red and fiery orange-red colors finish the display in fall. 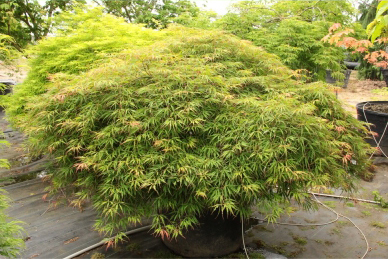 This vigorous laceleaf Japanese maple boasts yellow-green spring leaves that look as if they have been dipped in cranberry juice. Although the color is primarily green, this vigorous laceleaf Japanese maple stands out with leaf lobes colored a dramatic red at the tips. Similar to Viridis in its pendulous habit, this delightful variety changes to bright orange in fall. 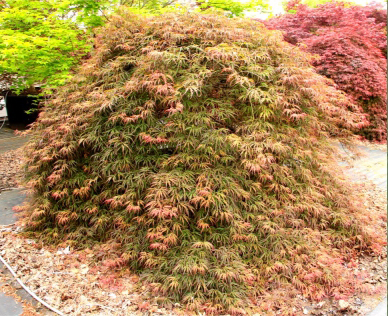 Not only are the leaves a remarkable array of colors, but the twigs are a distinctive copper-orange color in winter too! The somewhat open and sculptural branching pattern creates a sculptural look even once the leaves have fallen. The foliage on this laceleaf Japanese maple emerges with orange and red highlights. In summer, the green and burgundy leaves develop orange-red margins and contrast with red new growth. In fall, the lacy, dissected leaves become bright orange once more. 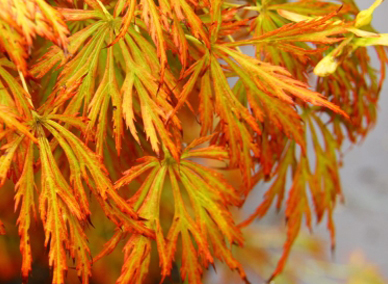 Kawaii can either be grown as a low, slow-growing shrub or staked upright to form a slightly pendulous small upright tree. The leaves have a feathery appearance with deeply dissected and serrated lobes.Bright pink-red spring leaves become orange-red with green highlights along the leaf veins in early summer and bright red-orange in fall. Chartreuse leaf bases and light petioles add to the appeal. In Japanese, the name 'Kawaii' means "cute", not to be confused with the Hawaiin island Kauai.