While most maples are regarded for having stunning leaf color in the fall, many Acer palmatum have colorful samaras and outstanding transitional colors from summer to fall. Many maples, when grown in warmer climates, will produce a second flush of growth towards the end of summer. These leaves are sometimes the most colorful and also contrast nicely with the older foliage of the tree. Acer shirasawanum ‘Jordan’ is one such variety with stunning color changes throughout the growing season. The growth later in the season features a darker orange color before bleaching almost pure white in dry, sunny weather. These brightly colored leaves contrast beautifully with pink-orange twigs on the newest growth before leaves change to a mix of orange, yellow, and red later in fall. 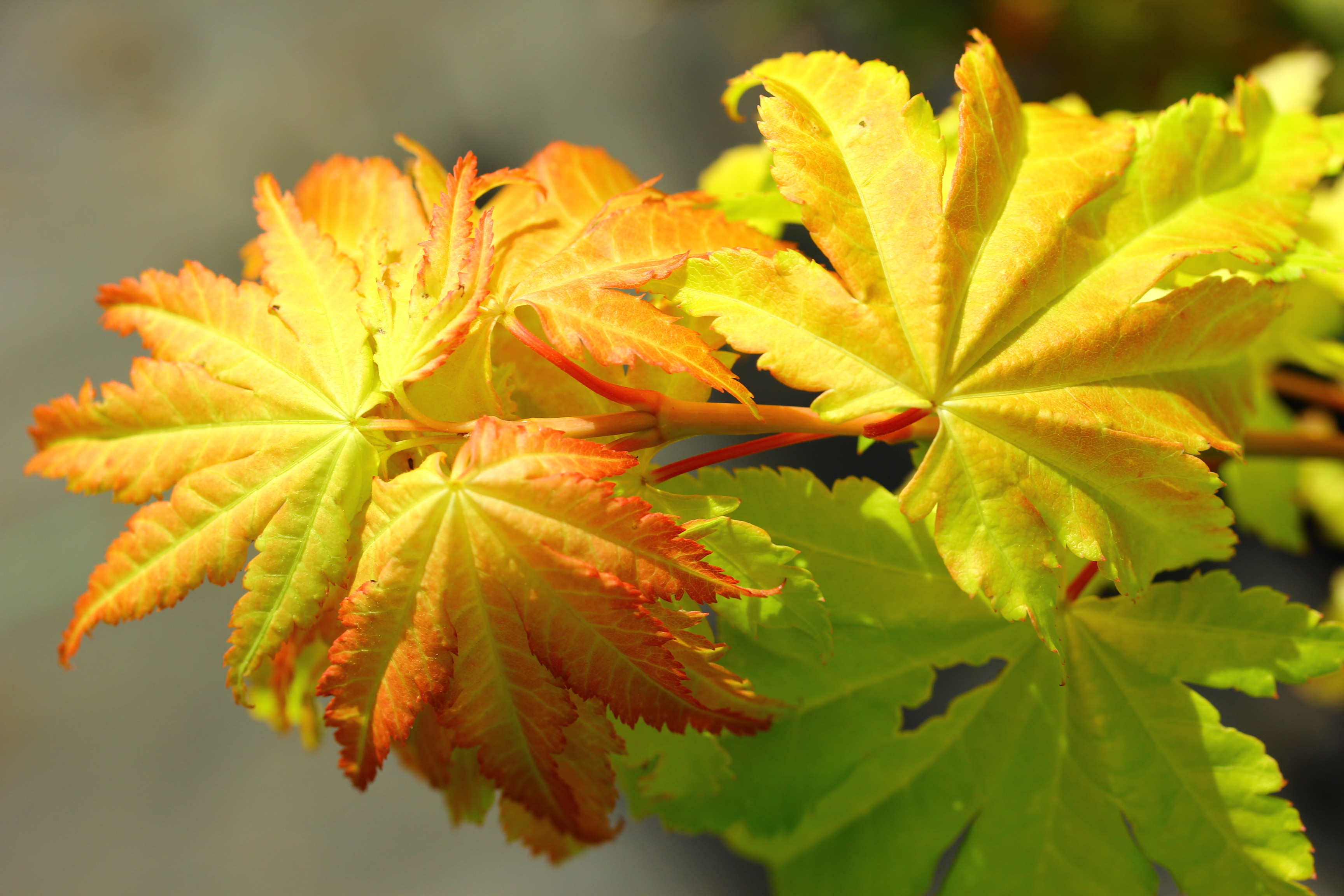 Autumn Moon is similar to Jordan but with more noticeably orange color throughout the summer. The fall color is typically displayed as a tapestry of yellow, orange, and red-purple tones.

Moonrise is a newer variety similar to Autumn Moon that was discovered by Carl Munn. The color is a slightly more contrasting yellow-green with fiery orange-red newer leaves. Fall color is a reddish-orange color, giving it an assorted color pallete throughout the seasons. 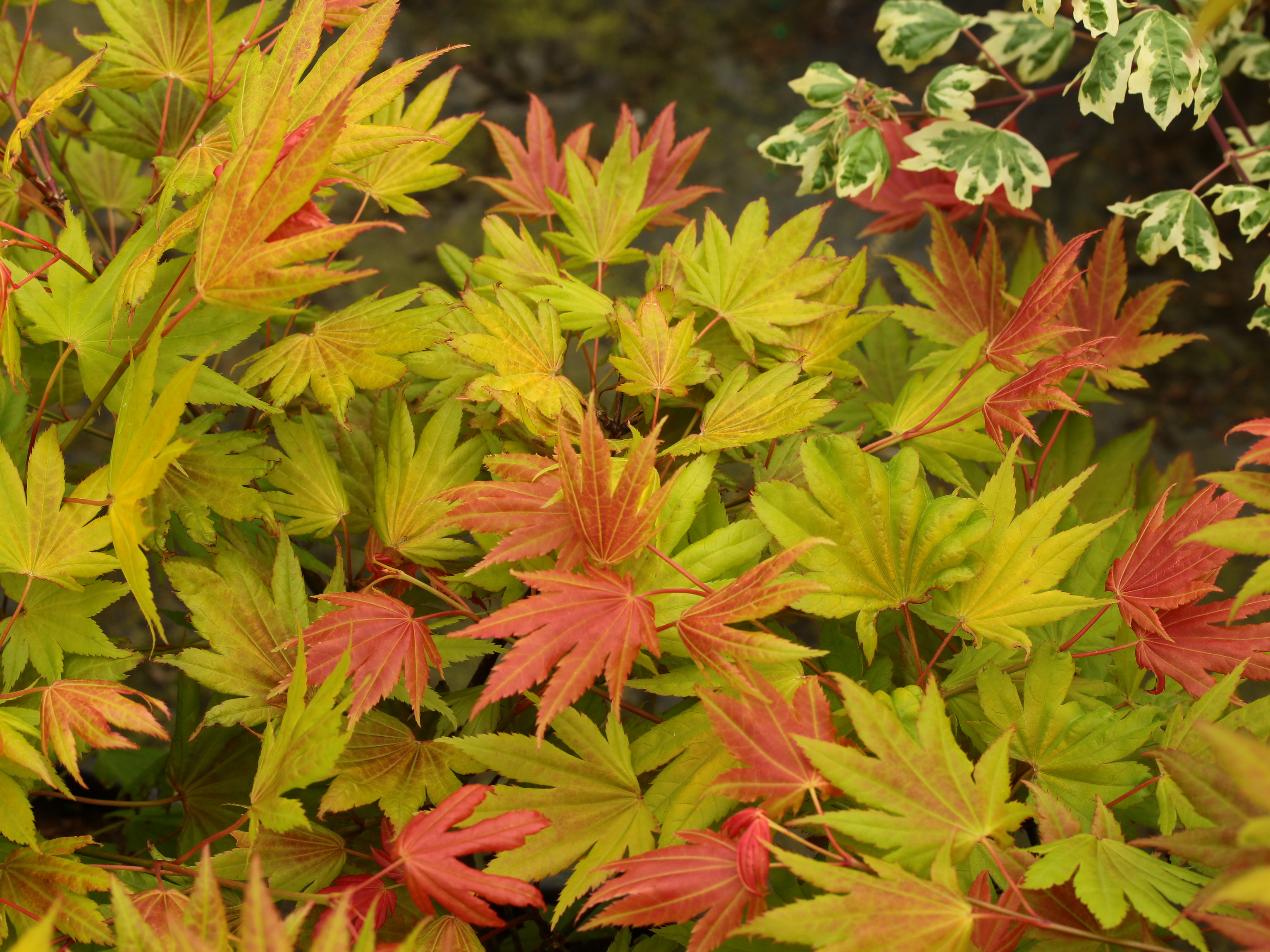 ‘Aureum’ is perhaps the most popular Acer shirasawanum cultivar, often referred to as "Golden Full Moon." As temperatures become cooler, the areas that were yellow become more orange and red while plants grown in more shade simply become a more brilliant golden-yellow color. Due to its popularity, this variety is available in a wide range of sizes. 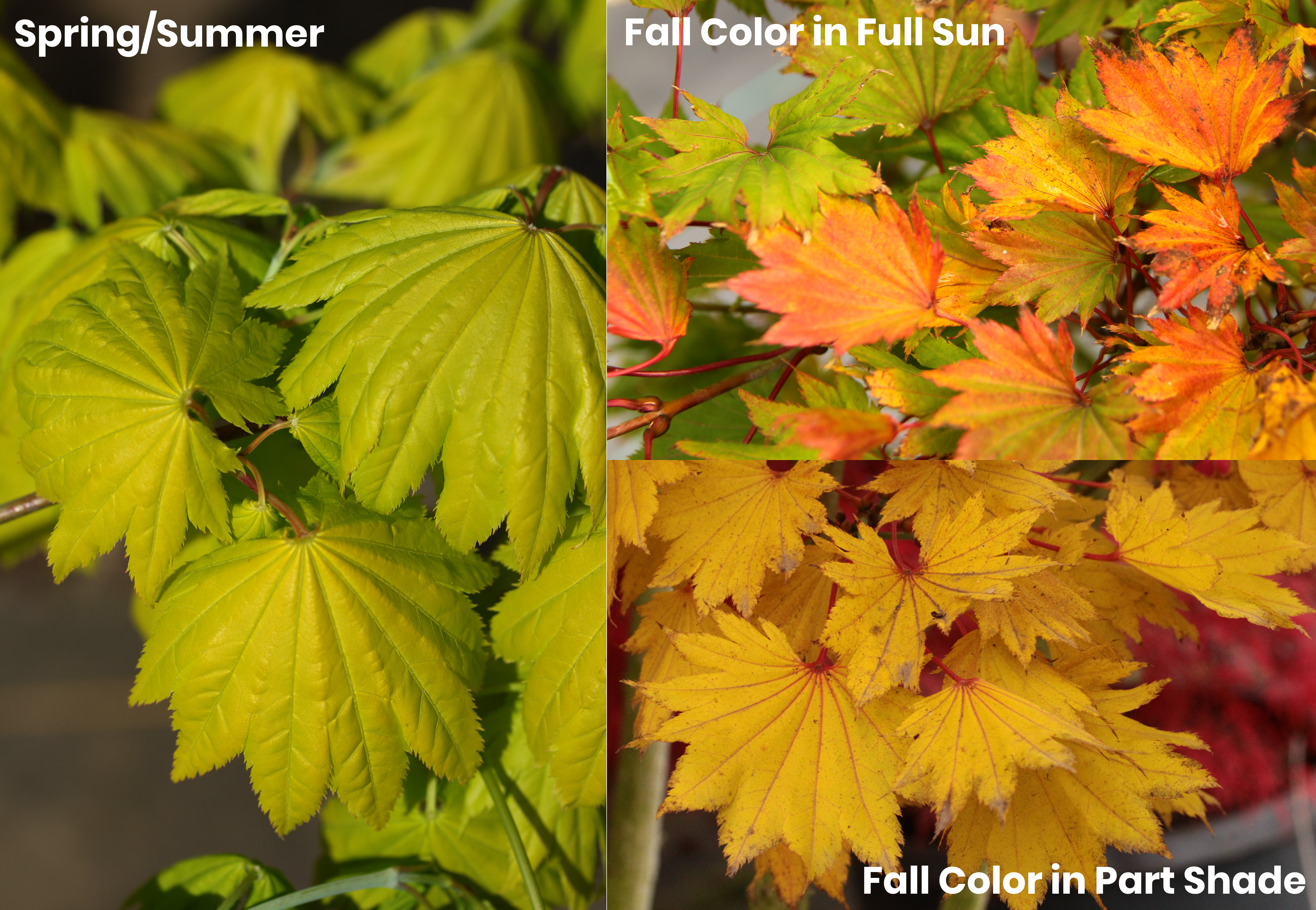 Some maple trees are known for their colorful twigs in fall as well as winter. ‘Sango kaku’, commonly called the “coral bark” maple, shows brilliant red bark starting in fall, persisting all the way through winter. Before the leaves fall from the tree, a glorious contrast occurs, displaying bright yellow leaves combined with the vibrant red twigs. This variety is fairly common and in high demand. We have a few similar varieties available as well, including ‘ Aka kawa hime’ and 'Little Sango' which are a bit slower-growing. 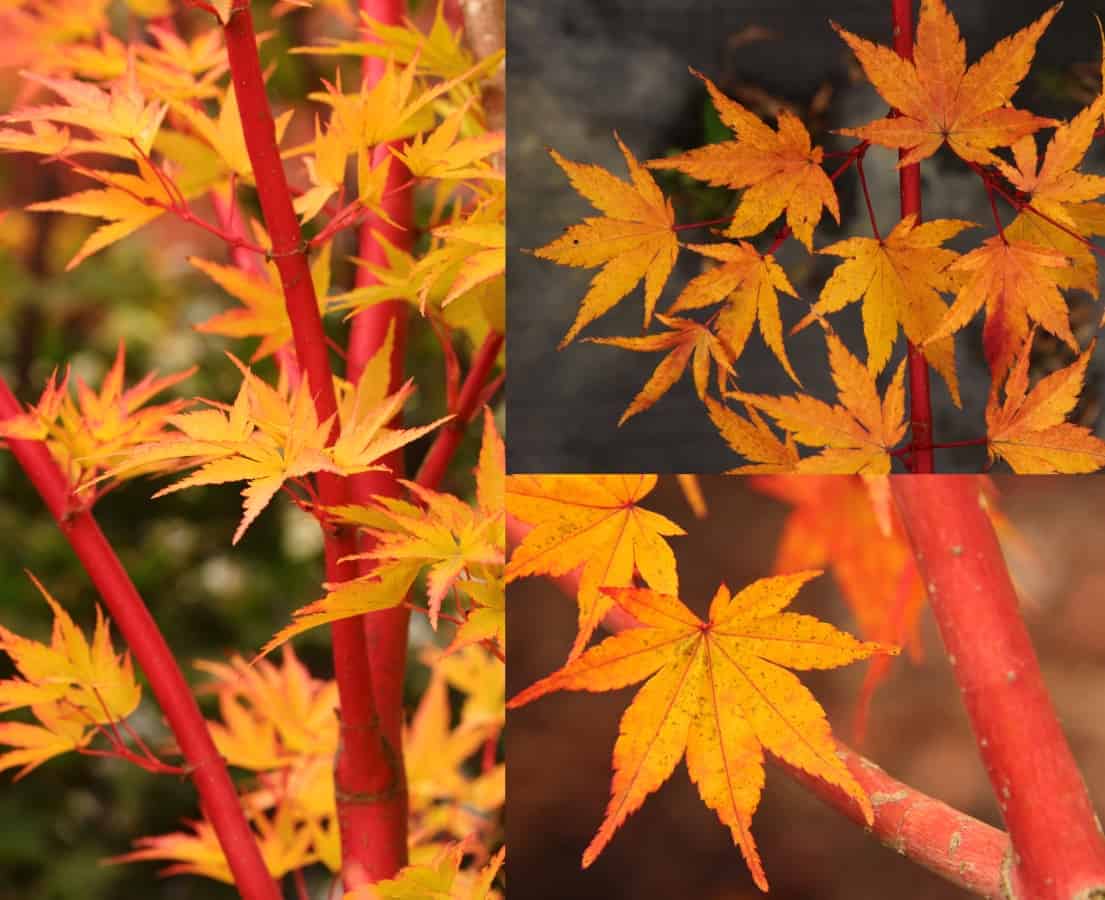 It is important to note that the leaves of maple trees vary much more than you might think! Acer triflorum is a maple which we do not commonly produce but have a limited selection of larger specimen-size trees. What makes this species unique is the fact that each lobe is completely dissected all the way to the base of the leaf, giving it a leaf that has three leaflets. It is truly unlike any of the “Japanese maples” we commonly produce. While it is green in the summer, the fall color show is one of the best with a mix of orange, yellow, and red as the leaves transform for autumn. The slightly exfoliating bark gives more character to this outstanding tree. 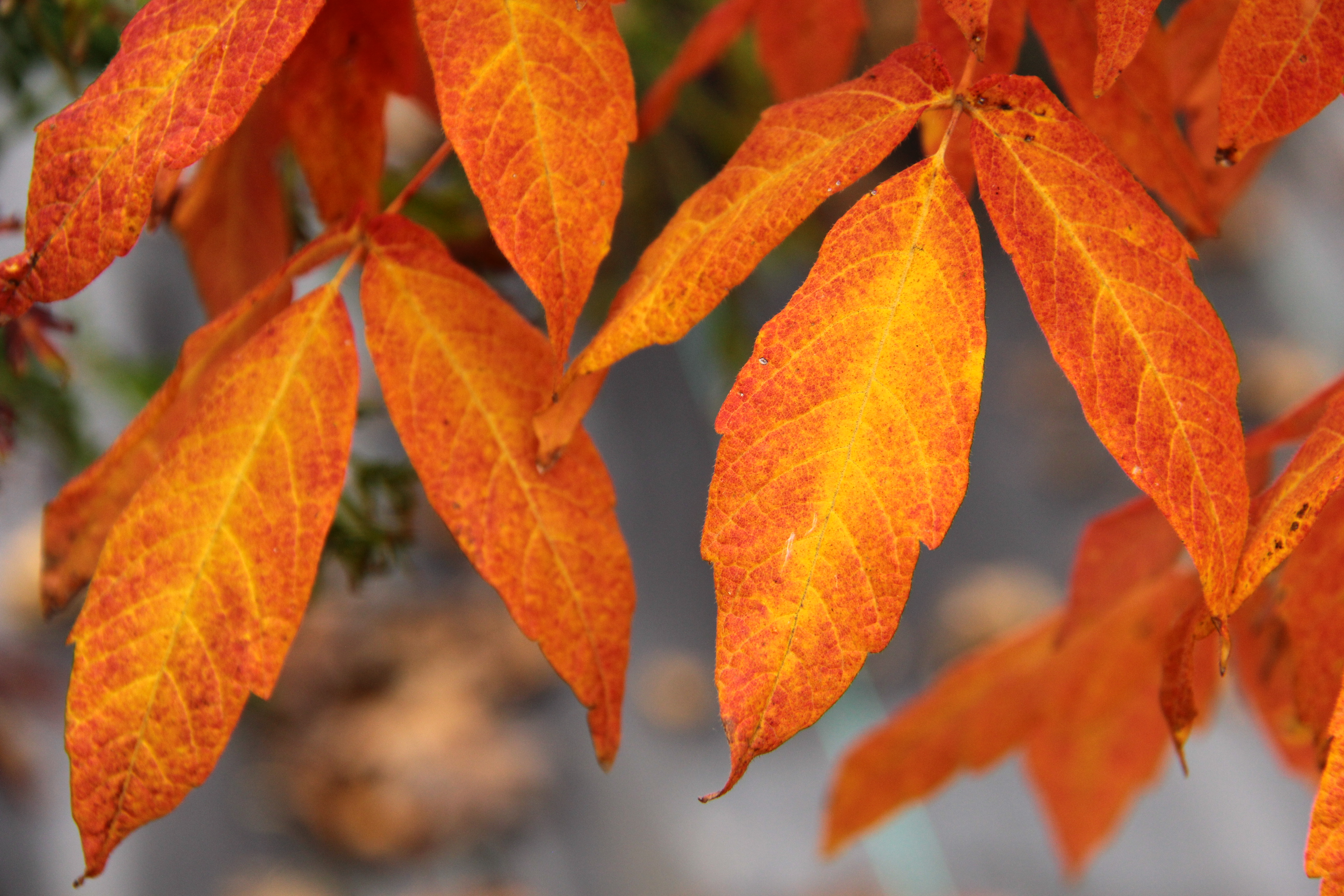 Acer palmatum ‘Amber Ghost’ has outstanding orange color even in the summer but getting more intense during fall. Fairly large leaves have subtle leaf veins of a different color. The bright orange color in fall makes it really stand out among most other maples. ‘Amber Ghost’ is a fairly slow-growing variety which makes it a suitable addition to most any garden! 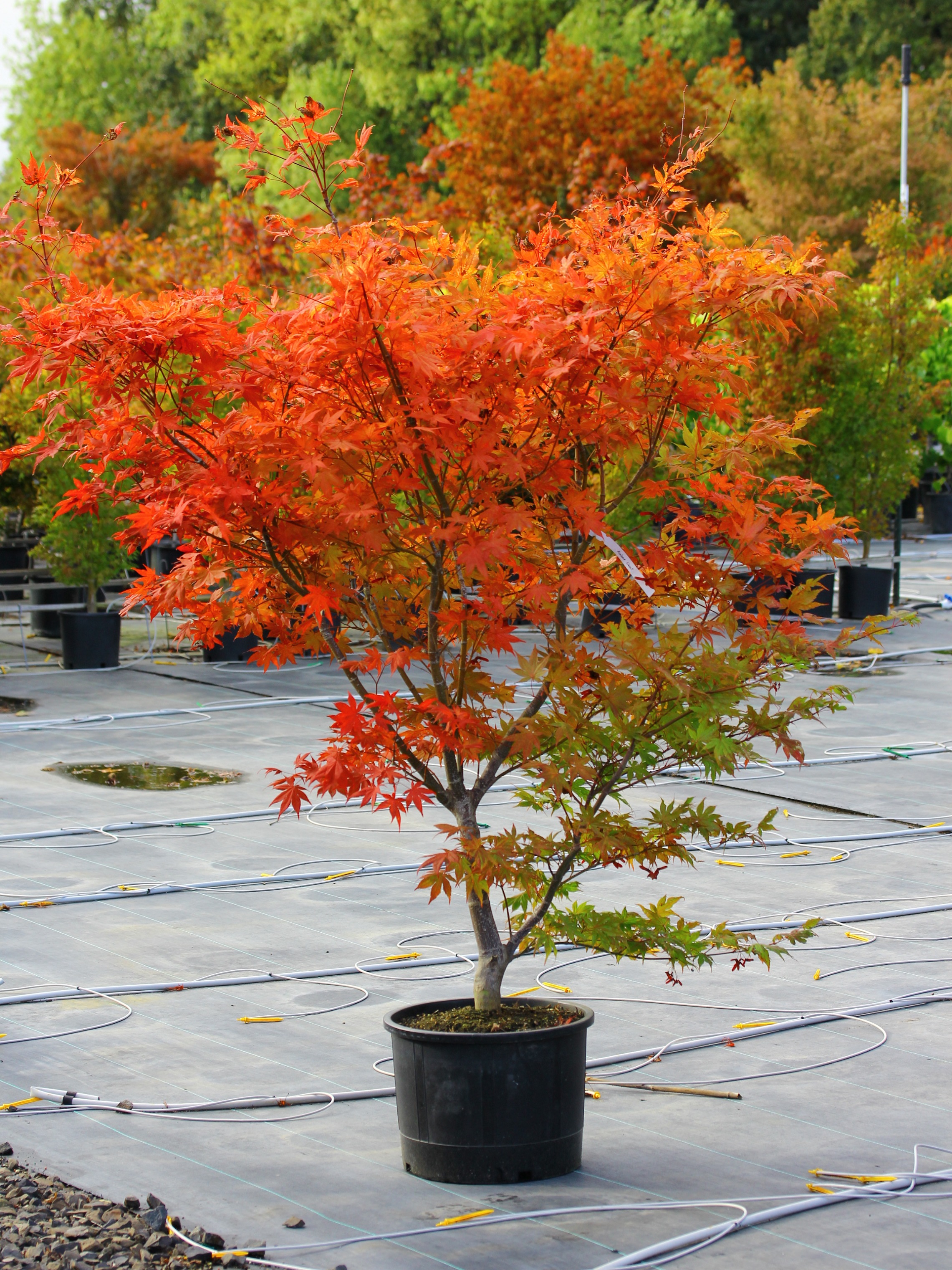 Finally, let’s discuss the fall colorof the “floating cloud” maple, Acer palatum ‘Ukigumo’. This variety is of course known for its extraordinary white and green leaf color in spring and summer, but as fall approaches, the white portions of each leaf become increasingly pink in color. This change takes place slowly after the latter days of summer, creating a mottled, pink, white, and green color combination. 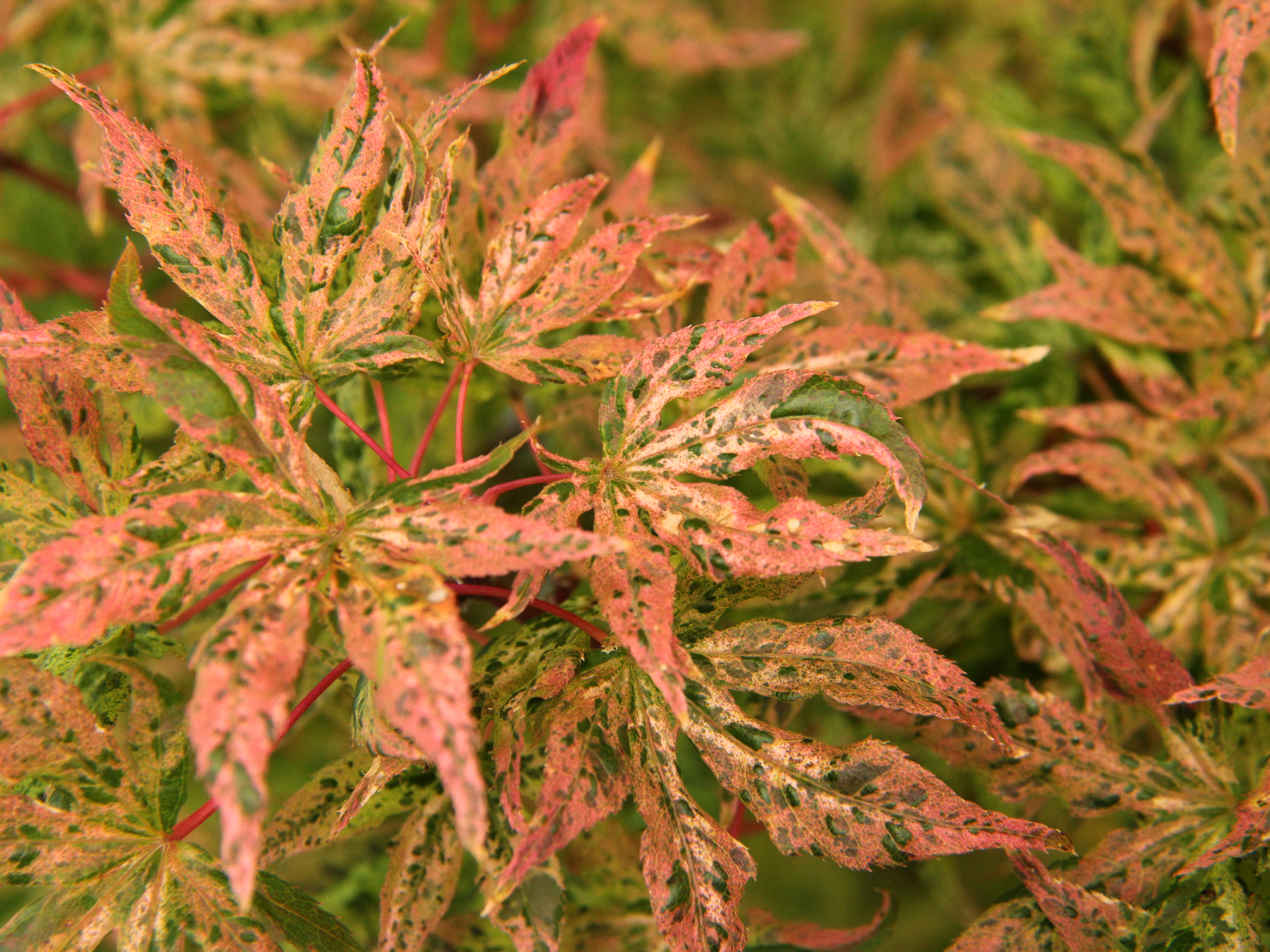 Check back for one more blog post in our series about maples, as the fall color progresses at the nursery!