Ginkgo trees have long been prized for their majestic yellow fall color and distinctive leaf shape. Ginkgo biloba is the sole species in this genus, and the leaves are most often clearly divided into two symmetrical lobes. Ginkgoes have been used in landscapes and as bonsai since ancient times. Today, they are still used in bonsai but have become widely used as desirable, low maintenance landscape plants and popular street tree options. In recent years, over a hundred varieties have become available, but we seek to offer only the best varieties. Although ginkgo trees are known for their unpleasant-smelling fruits, we have prioritized production of strains of ginkgo that are either sterile or are male clones that do not produce fruit. Some of our favorites are described in the categories listed below.

Columnar ginkgoes are excellent options for spots in the garden where a vertical accent is desired. Their ascending branches and slender habit makes them especially attractive. Some of the best upright varieties are listed below: 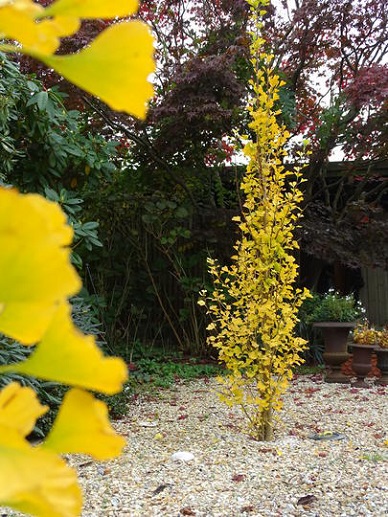 Menhir is a new, patented variety from The Netherlands with narrow form and blue-green color that becomes rich golden-yellow in fall. The branches are sharply ascending, making it perhaps the narrowest variety of ginkgo to date! 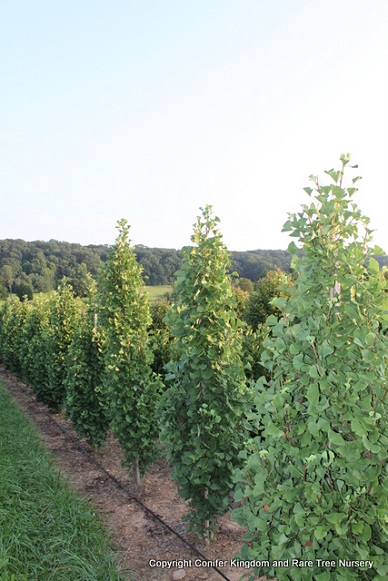 From new to old, unlike Menhir, this cultivar has been around for many years. It was one of the first varieties selected for its narrow, upright form and bright green foliage that turns golden-yellow in fall. Fastigiata develops into a nice, narrow, vertical accent, making it a good choice for gardens with limited space. 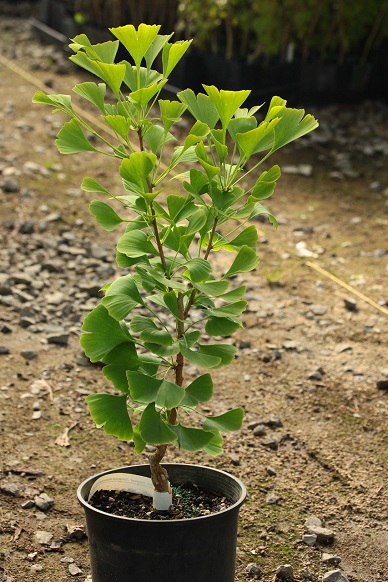 Before Menhir became available, Elmwood has long been the standard for narrow-growing ginkgo trees. It often forms a single straight trunk with minimal side branching until it matures. The leaves are large and quite deeply split, distinguishing it from other similar varieties. Twigs are a dark reddish-brown in winter. 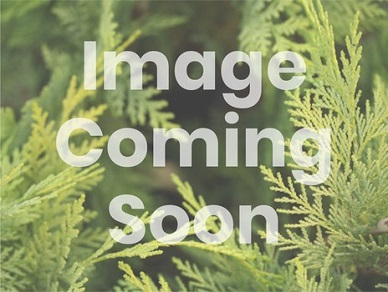 Potter Pete is a new variety still under observation. Like other columnar varieties, side branches are noticeably upward pointing, but this variety maintains a remarkably narrow habit even at a great age. We are hoping to be able to offer this one in the coming years!

Many ginkgoes are said to be weeping, but only a select few varieties have noticeably pendulous side branches. Here are the three best varieties with a weeping habit. 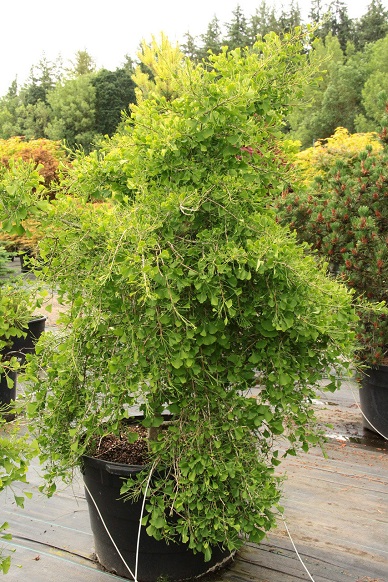 Weeping Wonder develops into a small, weeping tree with gracefully drooping side branches. The orange-brown twigs and fairly dense branching makes it distinct from other larger-growing weeping varieties like ‘Umbrella’ or ‘Pendula’. Weeping Wonder Ginkgo is also unique since its foliage takes on many different shapes. Some leaves are tube-like or filamentous while others have a traditional look. 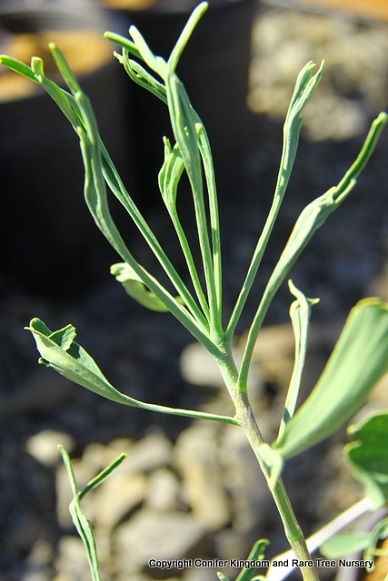 Kohout Pendula is also known as ‘Kohout Weeping’. This variety is quite similar to Weeping Wonder with strangely-textured foliage and a somewhat pendulous yet upright mounding habit. Introduced by Kohout Nursery in Germany. 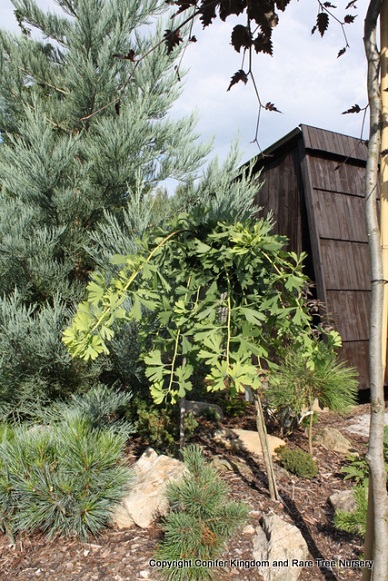 This new selection from Poland is the best weeping variety that has only recently become available! Large leaves are fringed on the margins of this elegantly-weeping, irregular-growing weeper. The weeping aspect is much more dramatic on Boleslaw Chrobry than other weeping varieties, partly due to its faster rate of growth that causes newer growth to bend down noticeably.

Not all upright-growing ginkgo varieties become large trees. The following varieties are considerably slower-growing than a regular Ginkgo biloba but still develop an upright, pyramidal form. 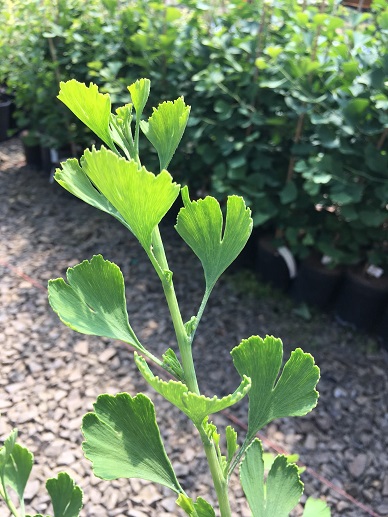 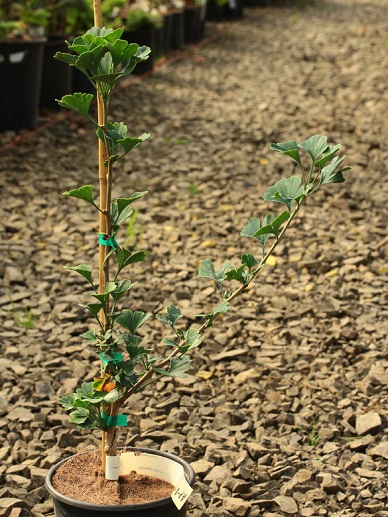 Gokusho-ba is a new variety that has a somewhat zig-zag, sculptural habit and dark green small leaves irregularly spaced. This variety is an excellent choice for bonsai due to its unique shape and slow rate of growth. 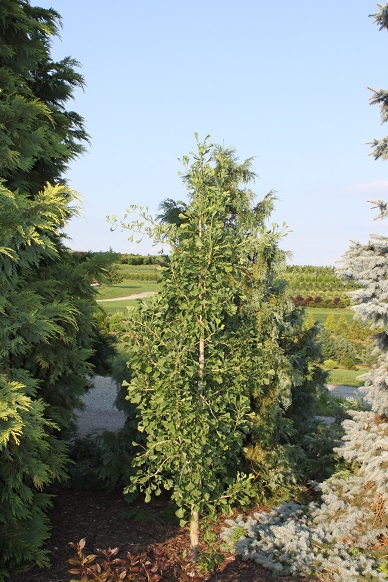 Thin, oddly-shaped leaves are very narrow and have a slight twist to them. The stems of this small tree are also bent and twisted dramatically, giving this small tree its name. Young shoots are covered with a fuzzy, brown indumentum. 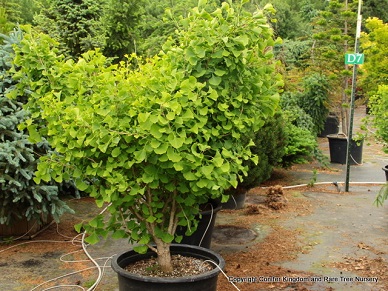 The dwarf upright varieties mentioned thus far are all fairly pyramid-shaped, but Chi chi has a rounded crown with dense, slow growth. The leaves turn a beautiful butter-yellow in the fall. Especially old plants develop protrusions called “chi chis” along the trunk and bigger branches.

Globe-shaped ginkgoes are perhaps one of the most desirable types of ginkgoes for their use in smaller landscapes and residential yards. 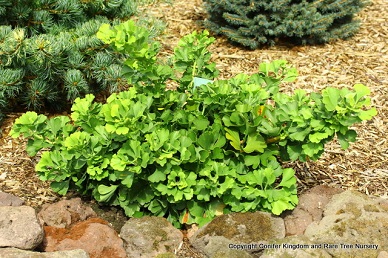 Mariken is one of the most popular dwarf ginkgo varieties. This dwarf Maidenhair Tree was discovered as a mutation in Holland in 1995. This variety grows very slowly with fairly large leaves that curl somewhat. 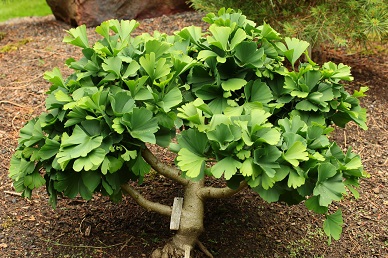 Troll is quite similar to Mariken in growth rate and growth habit, but the color is a darker green and the leaf texture is slightly different. This very dwarf cultivar has tiny bunches of rich-green leaves that transform to a brilliant gold in autumn. Its dense, irregular habit makes it a very ornamental plant. 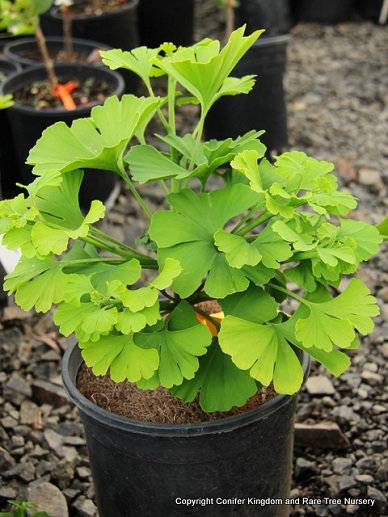 This compact ginkgo was found as a witch's broom in Wadsworth, Ohio by Bill Barger. Buds are very prominent on the twigs in winter giving this plant its name. Buddy is really distinguished from other dwarf varieties because of its knob-like buds. In spring, deeply cut leaves are large and slightly cupped. 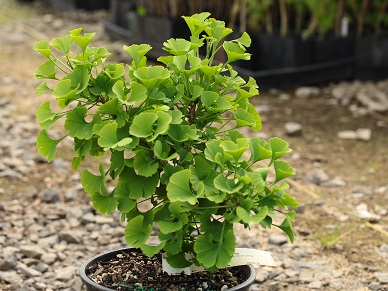 This faster-growing variety was found as a witch's broom in the city of Brno in the Czech Republic. Although it has a dense habit, it develops into a broad globe much sooner than varieties like Troll & Mariken. Foliage on Brno looks especially lush during the growing season, making it one of our favorites! 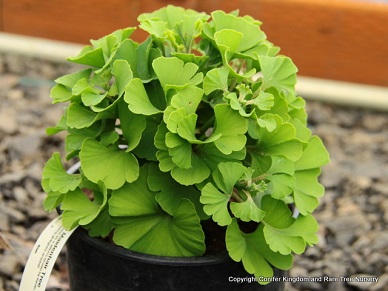 From larger to smaller, Sari is the only ginkgo slow-growing enough to be considered miniature! This special variety was found as a witch's broom by Kevin Fechke near his home in Nashua, NH and named for his wife, Sari. We are hoping to produce this one in larger numbers to make it available to customers in the near future!

Variegated ginkgo trees are possibly the most highly-sought varieties. Although the leaves are exceptionally colorful, it is all too common for the leaves to turn from a striped, yellow-and-green appearance to a solid green color. This unfortunate occurrence is called reversion when the genetics causing the variegated coloration are not stable enough, allowing the plant to revert to the original green color. The varieties we offer are the most resistant to this issue, keeping a well-distributed variegation quite readily! 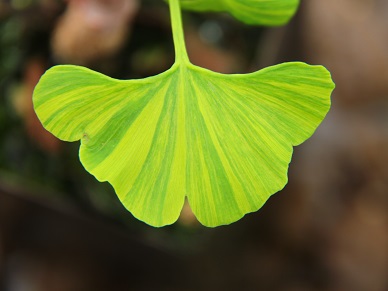 Majestic Butterfly has long been one of our favorite ginkgoes. It was found as a variegated branch mutation on the cultivar ‘Jade Butterfly’. It shares the same dark-green color of its parent, but leaves are also mixed with a rich golden-yellow striping. Eventually developing into a small tree with a rounded canopy. 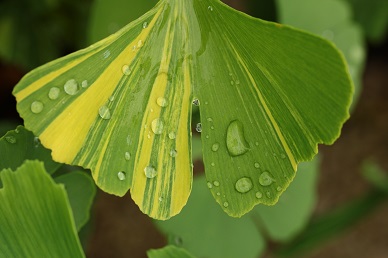 Fairly large leaves have golden-yellow striations that are very noticeable in spring but even into summer. The variegation seems to be one of the best; perhaps even better than ‘Majestic Butterfly’. Sunstream grows slightly more vertically than other variegated varieties, forming a slender upright tree with age. 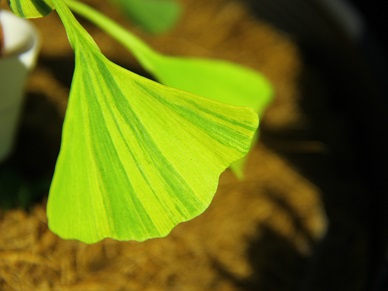 This female cultivar has deeply-divided leaves with a beautifully-striped variegation. The color intensifies into summer. Its variegation is remarkably stable, rarely reverting to green. Side branches are somewhat ascending, but similar foliage to ‘Majestic Butterfly’. 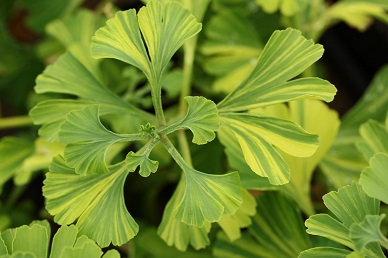 This variegated Ginkgo originated as a variegated branch mutation on ‘Mariken’ at Vergeldt Nursery in The Netherlands. Peve Maribo is also known as Peve Lobo, and it is unique in that it is one of very few variegated ginkgoes that are truly dwarf, developing into a small, globose tree. 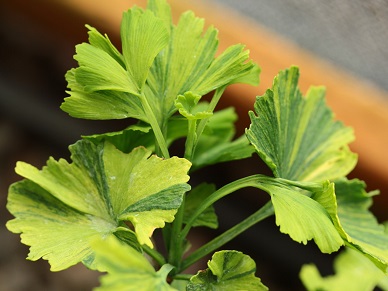 Found by Crispin Silva, this new variegated variety originated as a variegated mutation on 'Jagged Jade’. The dark, blue-green color of the leaves is shared with its parent, but leaves are also striped with golden-yellow variegation. One of our favorite ginkgo varieties, combining a unique texture and a special coloration! 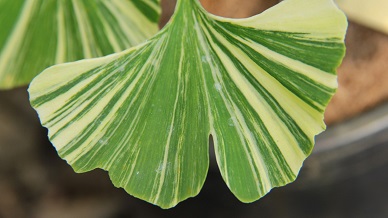 While most varieties are golden or yellow variegated, Vanilla Swirl has a distinctive pure white variegation. The variegation is quite reliably distributed among the plant, sometimes with half a branch having white color and the other half being green! Foliage emerges green, and variegation develops as the leaves mature. Leaves are also slightly turned, showing variegation from many angles. Found by Darren Heimbecker in Canada. 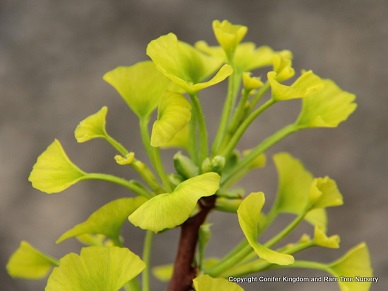 Variegation is generally a term reserved for varieties that have patches of unique color along with the regularly-colored foliage. However, Beijing Gold has bright yellow color all over when leaves first emerge in spring. Later leaves become more greenish with white to yellow striations on the foliage. 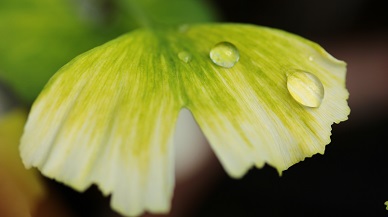 Snow Cloud is similar to Beijing Gold since they both have colorful leaves in spring. When grown in shade, the yellowish new growth bleaches to a stunning snow white, especially at the leaf edges. By mid-summer, the overall effect is white on green—a very nice contrast! Snow Cloud forms an open-branching somewhat irregularly-shaped sculptural shrub.